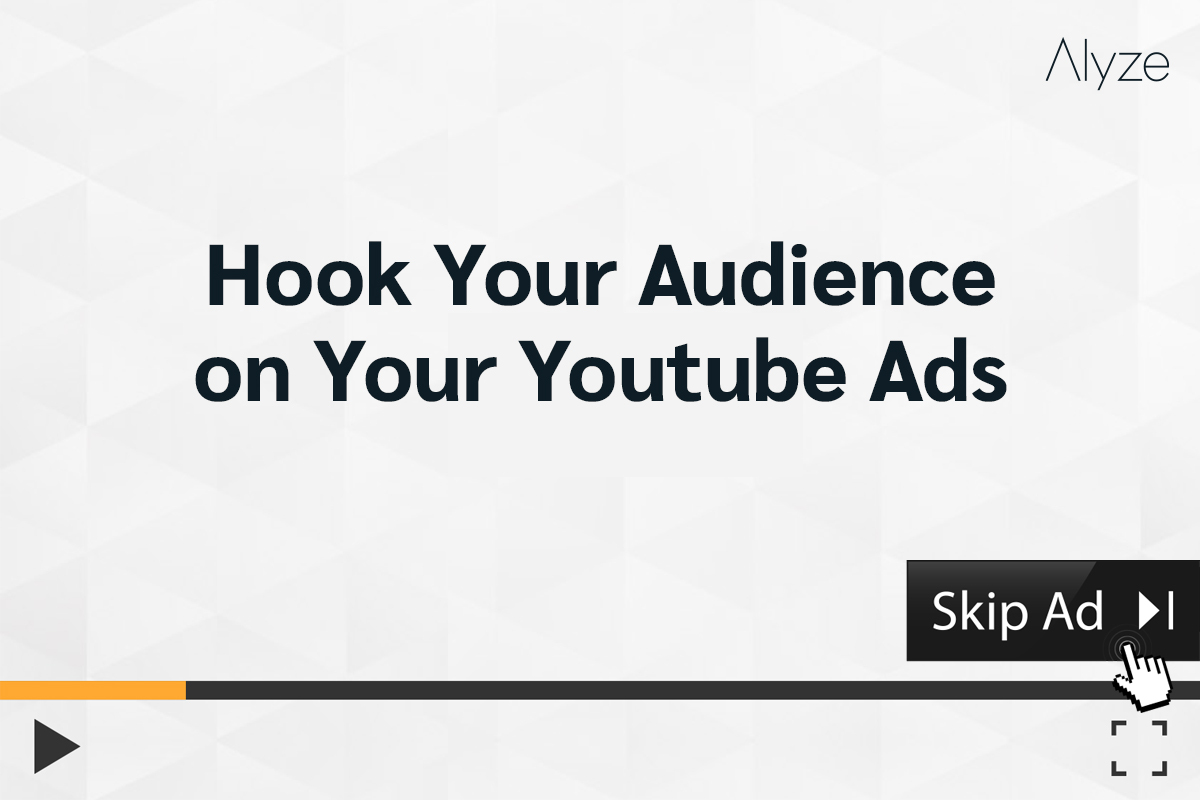 How can we avoid people from going directly to the “Skip Ad” button on our ads?

Most will place their mouse on top of this countdown to skip it as soon as possible. But there are instances when people will keep looking at the ad…even if the option of skipping is right there. What does it take for a video ad to watch even if you have the option of avoiding it just in front of you?

Engaging people with video ads is tough but with the right research, we can find ways to overcome this challenge. Here’s what we found at Alyze.

#1 Place Your Logo at the End

There’s always a fight between the creatives and the marketers when it comes to placing the brand’s logo. Marketers want it right at the beginning to be able to prime people into remembering the brand (or certain attributes of it, like “innovation” or “passion.”).

Priming refers to a technique that aims to change how people perceive certain content on an unconscious level. Introducing a person to a stimulus will influence their response to all stimuli that come after.

For instance, if you put a McDonald’s logo at the start of your ad, people are more likely to think of hamburgers afterward or process information relating to hamburgers much faster.

On the other hand, creatives want to show the beauty of the ad first. They want people to engage with the content. Laugh with it. Get them surprised. Make them cry. And only then, put the finishing touch with the brand’s logo.

Our test’s findings indicate that ads that mention the brand in the first five seconds (as a visual logo or audio mention) have a higher ad recall and brand awareness, but people will tend to skip them. 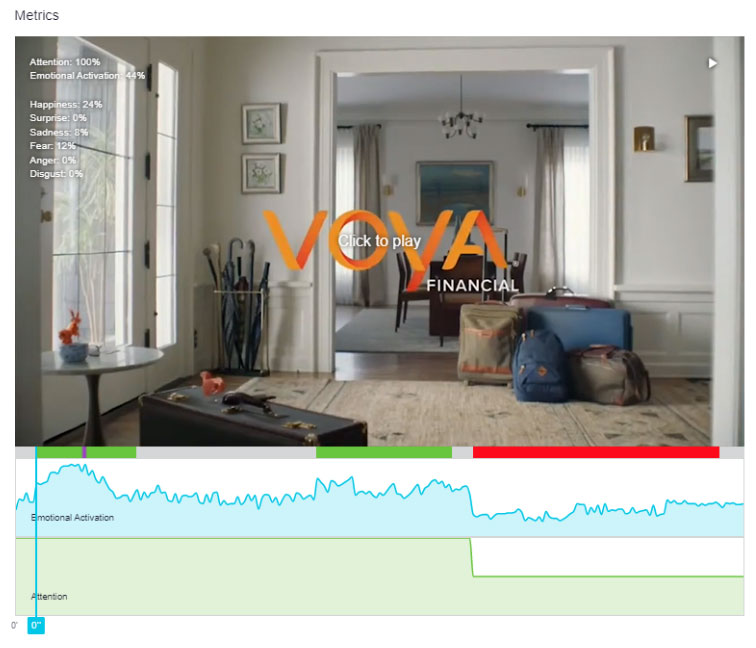 People also tend to avoid finishing watching the ad, with a significant loss of attention in the second half of it. It’s not a surprise that only 6,000 people watched this ad so far.

However, placing it at the end will help link people’s emotional experience of the ad with the brand. If they experience positive emotions, they will be more likely to link those feelings with the brand’s name.

In this ad by Voya Financial, we see that people react negatively to the logo displayed at the beginning. Soon after the display, the audience’s reactions reach a peak level with Anger at 45% leading the chart. 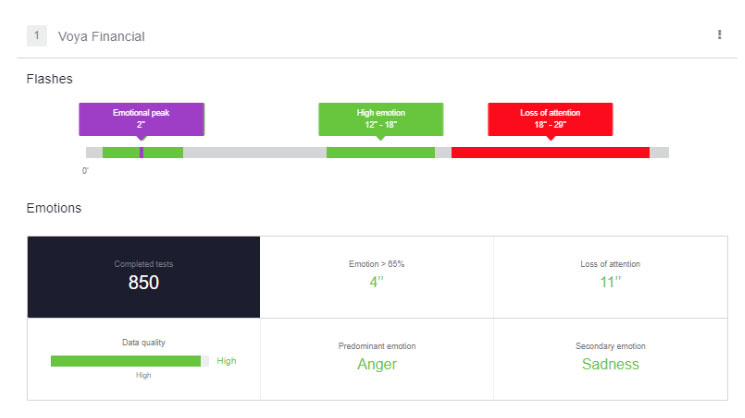 People also tend to avoid finishing watching the ad, with a significant loss of attention in the second half of it. It’s not a surprise that only 6,000 people watched this ad so far.

However, placing it at the end will help link people’s emotional experience of the ad with the brand. If they experience positive emotions, they will be more likely to link those feelings with the brand’s name.

Look at the results of our test showing PayPal Honey’s ad to the audience. The video develops a storyline without showing the logo or mentioning the brand until the end when the customer finds a solution to his problem. While watching the ad, people experience an emotional build-up led by a feeling of joy. They maintain a high level of engagement (0 loss of attention) with happiness and surprise being the most prominent emotions. 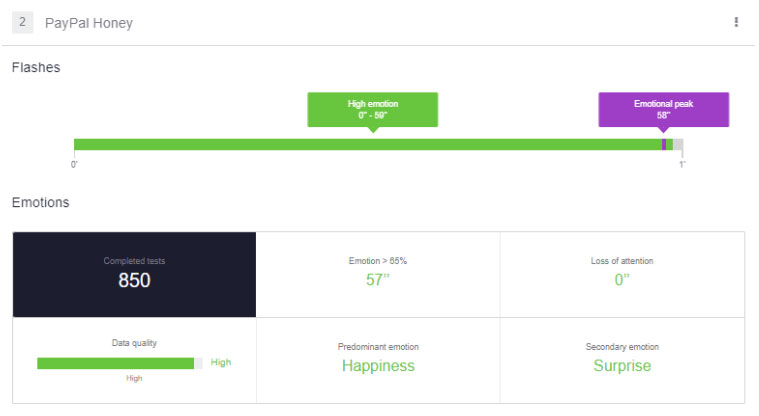 The peak reaction occurs towards the end coinciding with the logo display. This helps strengthen the bond between people’s positive emotions and the brand, transferring those feelings towards the brand. 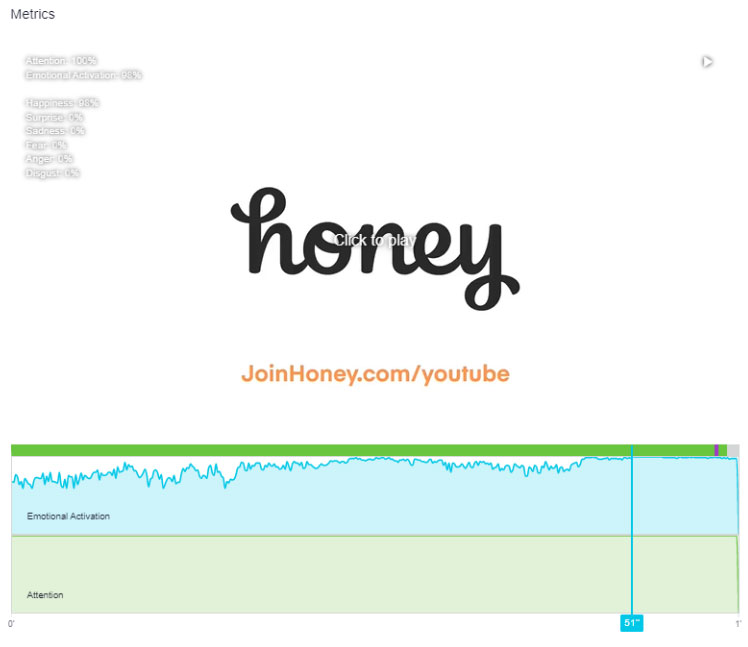 The ad’s popularity with almost 3.5 million views raises the brand’s equity towards its stakeholders and improves its perception across different demographics.

People are engaged with videos that tickle their emotions. The more you activate people, the more you’ll grab their attention. Whether you get a nice giggle or see something that makes your jaw drop, you’ll most likely get hooked on the ad and are eager to see more of it.

Now think about what tone most of the ads set in these first five seconds. Do they make you wander into the abyss or get you spooked just a little? Well, definitely not the latter.

Our test results show that the most successful ads are the ones appealing to your humor. People are more likely to watch funny ads and they’ll reflect positively on time viewing and brand recall.

Look at IKEA’s “Let’s Relax” ad in our test. The fast-paced music paired with an atypical storyline captivates the audience from the first moment.  People are curious to see where the story leads and it finishes with a strong punch line paired once again with Ikea’s logo. This coincides with the ad’s highest emotional peak. No wonder more than 10 million people have seen it so far. 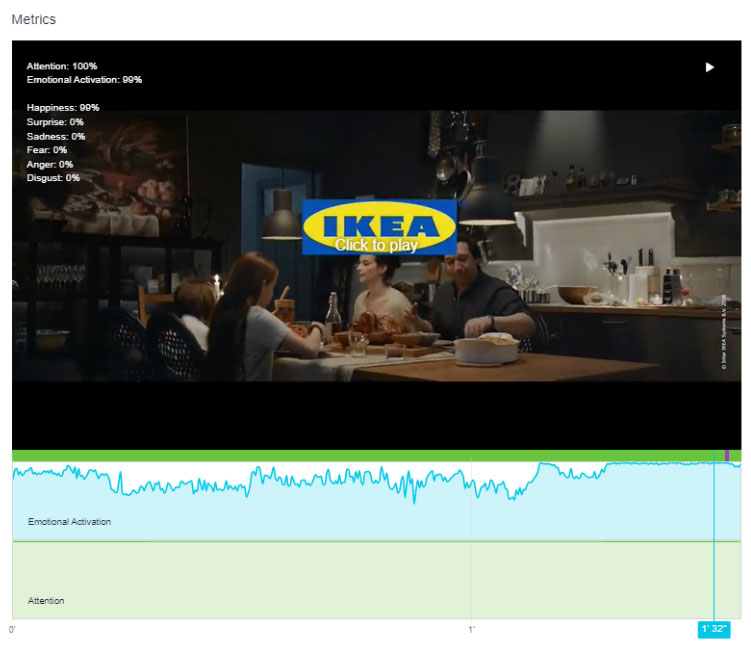 The emotional activation remains high throughout the ad, led by feelings of happiness, and the peak comes when you need the most: remembering the brand in a positive light.

#3 Include a Real Human Face at the Beginning

There’s something about other people’s faces that make us want to look at them. Don’t you wonder how we always meet the eyes of a stranger right away?

Well, putting a face on a Youtube ad is only one part of the equation.

Our findings say that ads that have familiar faces (usually celebrities) tend to engage people for a longer time. If this person also smiles during the first five seconds, the brand metrics will skyrocket. Having a recognizable face will make people want to stick around.

Old Spice has hit a jackpot by adding Terry Crews and Isaiah Amir to their commercials. Having a celebrity like the actor and former American football player, Isaiah Amir, appearing and narrating this short and fast-paced ad has the audience at the edge of their seats from the very first moment. It helps to have him show his athletic body and as we see in our test, attention levels are at their highest throughout the full 30-second ad. The audience is glued to their seats and they experience primarily happiness with a clear smile on their faces. 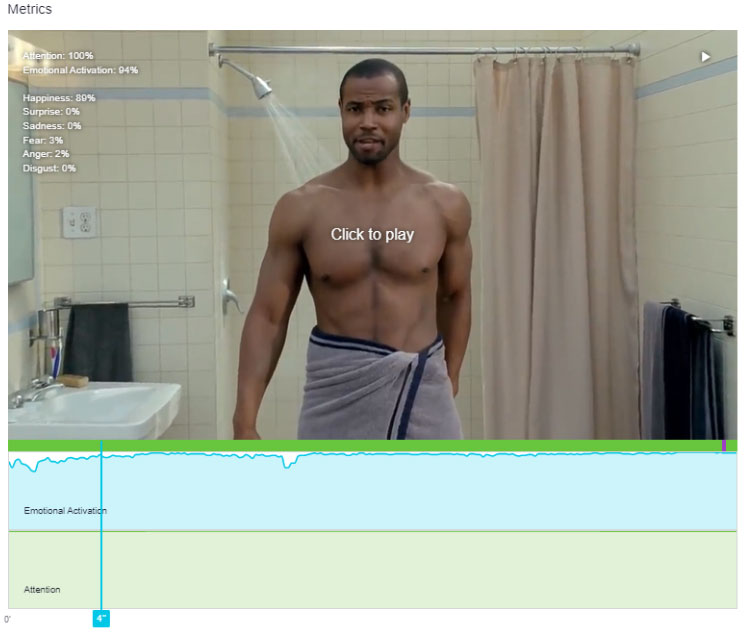 If you look at their ads featuring celebrities, you’ll see that they usually have above 1 million views easily, with individual ads reaching as high as 60 million views (like the one used in this test).

#4 Use Specific Musical Styles to Break the 5-Second Barrier

Sound is an essential part of any video. It helps set the tone of the content and appeals directly to people’s emotions.

We are usually not aware of the musical element and thanks to this lack of attention, it can get under our skin much easier. There’s no rational barrier filtering out the musical content, so it goes directly to our hearts. Just mute a suspense or terror movie for a while and you’ll see what happens.

We found that when an ad contained calming, relaxing, or action-oriented music, people were more likely to skip the ad. However, ads containing humorous music encouraged people to keep watching and also helped them better recall the ad.

There’s more. How else does music affect brand awareness? No matter which musical style is included in the ad, people have lower brand awareness. But if the ad features no music within the first five seconds of the ad (only inserting it afterward), people respond more positively. They might think that the video is not an ad right away or the lack of music might mess with their usual expectations of ads containing music.

Looking back at PayPal’s Honey ad discussed earlier, you’ll see that the sound element is used strategically in each section of this 1-minute ad. First, it relies on sound effects (e.g. vinyl crackling sound) to get you into a specific mood. Next, silence enhances the customer’s main struggle followed by some additional sound effects (e.g. keyboard typing) that add dynamism to the storyline. And finally, we’re introduced to a light-hearted waltz that keeps a humorous mood throughout the rest of the scene.

Sound and music used strategically will get your audience glued to their screens.

There’s an interesting science behind making ads more appealing to the public, but we shouldn’t reduce these findings to cold formulas for success.

These findings point out some general trends that can help creatives shape how they make their ads. What makes people want to stay tuned to a Youtube ad? Here’s a summary:

As in any other creative expression, ads should combine art and science in their battle for people’s attention. Pre-tests can help in this endeavor. At Alyze we can help you with that.