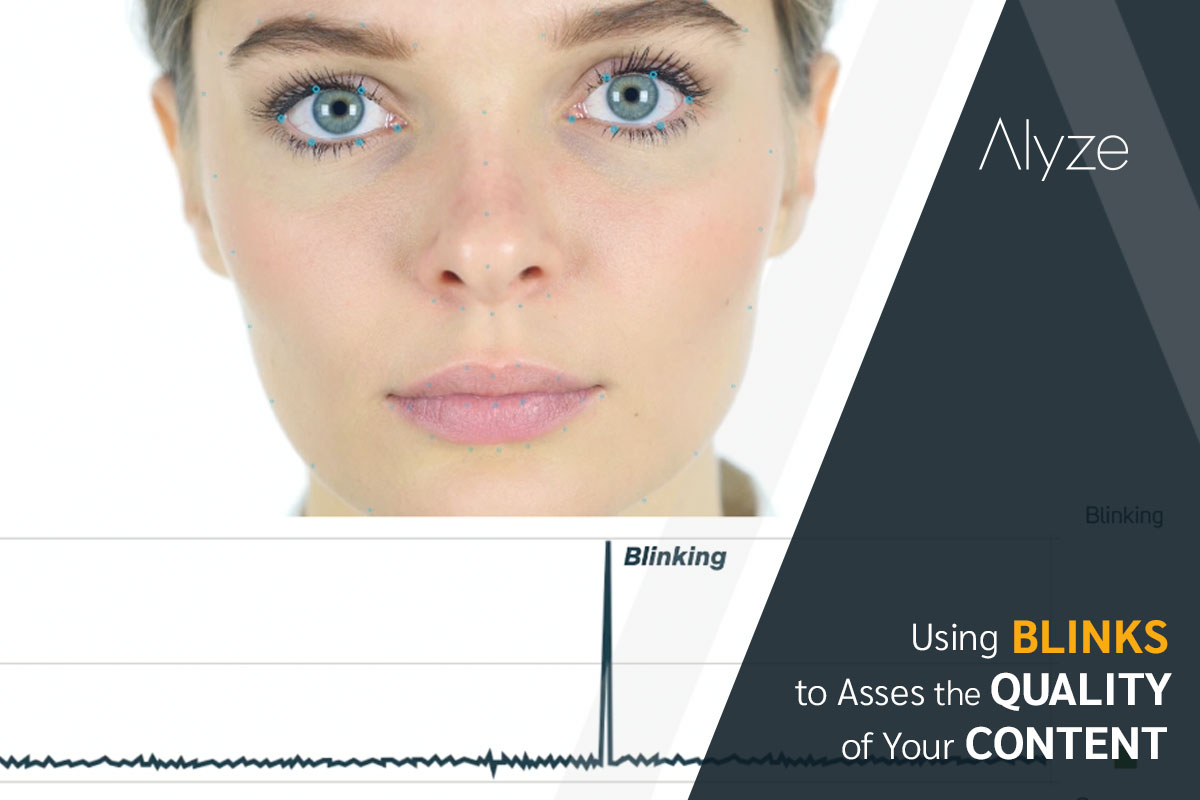 How to Use Blinks to Assess the Quality of Your Content

Companies are currently competing for one of the most limited and precious resource: our attention.

We’re highly selective and we tend to rapidly disengage from things we don’t enjoy looking at. We use eye tracking to see how customers shift their attention to our products and services but there’s an additional way to learn about their level of focus: eye blinks.

Blinks are more than just a means to keep our eyes lubricated and cleansed. When we blink we momentarily lose track of our surroundings and less information is processed. We tend to be unaware of our own eye-blinking and since it’s more involuntary this helps us access deeper parts of our psyche.

If we don’t control it, we’re less likely to lie or mask our true behavior and expectations which in turn gives us a more transparent look into what is important to us. We’ll be less likely to blink when we look at something we perceive as valuable (and not lose bits of significant information to us).

By learning our customer’s blinking patterns we can understand what they like and what’s not important to them.

For instance, if you compare a group of typically developed toddlers with one that has autism, you’ll see how their blinking patterns differ based on what they value the most. The typical 2-year-olds normally show interest in social cues like people’s faces while autistic kids have an increased attention toward physical objects like trains.

A study found that when these groups of toddlers were presented with videos portraying physical movements (e.g. opening a door of a toy wagon) vs emotionally charged social interaction (e.g. argument between two people), there was a significant difference between both groups of toddlers. The autistic kids blinked fewer times when looking at physical objects in motion while typical toddlers reduced their blinking when looking at the characters' faces in an confrontational scene. By timing the video scenes with their blinking rates, researchers knew what was important to each group of children.

The global eye tracking market size is valued at more than $800 million with a revenue forecast of $8 billion for 2030 at an astonishing CAGR rate of 33,4%. It’s an attractive market that you don’t want to be left out of, so what's the value of this tool?

What do we know about eye-blinking in customer behavior?

With several studies on eye-blinking, we’ve learned the following about people’s minds and behavior:

A precise measurement of spontaneous eye blinks will help us understand what our customers like and remember.

Take for instance a study that focused on linking blink rate with people’s memory of scenes from a full-length movie. People watched a 2-hour movie, “The Chaser”, then watched a 5-minute nature documentary, and rested for an additional 5 minutes before they were asked to report the most memorable scene from the movie. After 4 weeks, participants would answer additional questions for 32 movie scenes (while looking at the scene’s still shots) to assess how well they remembered the scenes and get their subjective rating on how memorable these scenes were to them.

The findings from this study show that the most memorable scene retrieved spontaneously coincides with people taking more time between blinks.

In other words, a lower blink rate matched with more emotional scenes. And this happened for the 3 most memorable scenes from the movie!

Additionally, the most memorable scenes that were recalled with visual cues (still shots) match with the audience’s lower blink rate (e.g. more than 8 seconds between blinks). Taking more time between blinks helped people better remember the scene. And when they blinked more often during certain scenes, they were less likely to remember them well.

In summary, viewers take more time between blinks (thus lower blink rate) when they’re watching something interesting. Therefore, we suppress our blinking when we want to pay more attention to something.

Video games are very interactive and require much of our attention to be able to perform well.

To avoid missing out on vital information on our screen we’ll tend to blink less, but there’s an additional effect that researchers found when analyzing different video game dynamics.

Scientists compared people’s blinking patterns while playing fast-paced and slow-paced computer games. These games had a similar difficulty but changed the pace with which visual information was presented to them.

The slower-paced game was Age of Empires II, a more 2D strategic game from a third-person perspective that didn’t have any time constraints.

The fast-paced one was Quake III Arena, a first-person shooter 3D game in a maze-like environment with limited time to win.

Since researchers wanted to focus on the influence of the pace of visual information on blink rate, both games were played without sound. They would first record people’s baseline blink patterns and then compare them when they were playing these games to see the rate of change.

The findings revealed that people reduce their blinking rate more for the fast-paced game by almost 66% than for the slow-paced game (by around 50%).

In other words, people will avoid blinking when they see more data per second to avoid losing valuable information.

If they’re engaged with what they’re doing, they don’t want to lose something that might happen during the 0.4s blackout time when they blink.

Eye tracking has been widely used to analyze consumer behavior. However, there’s less research on the blink rate in online advertisement.

This alternative measure can help us dive deeper into the customer’s engagement level. For instance, if we relied solely on assessing people’s interest with eye tracking we would be limited in instances like daydreaming where people are looking but they’re not attending to what’s in front of them.

In TV advertising researchers have found that when people increase their blink rate or the blinks last longer, they’re more likely to be less focused because of a lack of interest, tiredness, or they’re trying to avoid the content.

The study analyzed 1,040 consumers’ facial reactions to 118 advertisements. Each person viewed 8 of these (selected randomly) and they were asked recall questions afterward (e.g.listing the brands they remember). Some brand questions were aided (still images from the ads were shown) and others were unaided (open-ended questions with no ad image).

Results show that the more viewers looked at the ad, the more they remembered and liked it.

They had fewer blinks during that time so less information was lost. This effect was significant for unfamiliar ads and aided brand questions. In other words, consumers were less likely to pay attention to ads they already knew and they remembered these unfamiliar and interesting ones when they had some cue to awaken their memory.

They also found that ads that performed better had on-camera spokespeople (vs voiceover) and animals. These elements increase people’s memory of these ads, and their likeness, and these features have a positive effect on sales. In addition, researchers point out that showing the product’s packaging can lead to avoidance if it’s overused. It’s helpful at the point of purchase, but ads can take away people’s focus from the ad in general.

Blink rate: Alyze’s next feature in our measurement toolkit

We’re proud to announce that we’ll be integrating blink measurements into our platform very soon to help our clients dive even deeper into knowing their customers.

Being able to understand people’s behavior from different angles (facial features, voluntary behavior, eye movement, etc.) allows our clients to pinpoint exactly what works and what doesn’t with their content. Blink patterns will add further insights into learning what the audience engages with and it will improve the client’s creative decision-making process.

As we’ve seen before in this article, blink patterns have been used in different contexts like movies, video games, and advertisements, which allows our clients to explore their customer’s reactions in a variety of industries. With our emotion recognition solution, you can expand your reach beyond what traditional tools allow you to.

By adding blink rate to our emotion recognition solution you’ll be able to learn the following:

With this information, you can plot these different blink metrics in a chart where you’ll see points of higher and lower engagement with your content. You’ll know exactly where people get bored or increase their interest and this will likely reflect on their capacity to remember your message some time after watching your content.

Keep updated with our latest releases on our platform which you can check out here.

We’re here to help you effectively reach your audience and get the best results out of your content in no time.